Low carb green bean casserole made from scratch with all kinds of goodness! This is the perfect Thanksgiving side dish, but it’s easy enough to make any night of the week.

I grew up side-eyeing the green bean casserole.

Let’s be real – it’s not the prettiest dish and also, as a kid, green beans were the devil.

Luckily, my kiddos did not inherit the hatred of green beans that I had as a kid. They LOVE them and now I do too.

Normally I just cook green beans in bacon grease with tomatoes and onions (do you want that recipe? It will always be my favorite way to eat green beans!), but as the holiday season approaches, I knew I had to dream up a low carb green bean casserole.

I’m calling this a ‘healthy green bean casserole’ but I know I’m going to get some flack for it. Healthy is such a relative term – if you’re low carb though, this fits the bill. If you’re trying to eat low calorie or low fat, you might want to look elsewhere. 😉

Rather than your traditional can of cream of mushroom soup in this recipe, we’re using cream cheese as the thick, creamy goodness. It coats the green beans and adds great flavor.

This isn’t going to taste quite the same as a traditional green bean casserole, but if you ask me, it tastes better and you won’t go into a carb coma afterwards. 😉

How to make green bean casserole from scratch:

To start, we’re going to fry up some bacon. I feel like all delicious recipes start with this step, don’t you?

Add in some diced onions and a bit of garlic and cook until the bacon is crisp and the onions are soft.

You’ll want to leave about a tablespoon or so of bacon grease in the skillet, but drain off any excess.

Add a brick of cream cheese and some chicken broth and cook that over low heat, stirring constantly, until the sauce is smooth and creamy.

Pour that mixture over a bowl full of frozen french cut green beans and give it a good stir.

Pop the mixture into a 9×13 baking dish.

Everyone loves the crunchy goodness of the fried onions that traditionally top a green bean casserole, but they’re full of carbs so we’re getting creative while still keeping things simple.

Crush up some pork rinds and sprinkle those over the top along with a little dried minced onion. Flavor + crunch! Doesn’t get better than that!

This low carb side dish was a big hit with my family. I hope you’ll test it out on your family this holiday season too!

More low carb side dish recipes that are perfect for the holidays:

Keto Deviled Eggs: These make a great snack, appetizer, or side dish to any holiday meal.

Cauliflower Casserole: A true favorite of mine, so rich and creamy!

Prosciutto Wrapped Asparagus: Elegant and so full of goodness – this one is perfect for holiday dinners.

Broccoli Casserole: Have you seen the reviews on this recipe? People rave about it! 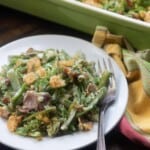 Low carb green bean casserole made from scratch! This is the perfect side for any holiday dinner!

Looks delicious ! I was wondering if you could post recipes for school lunches? I’m trying to eat healthier while trying to balance out homework and exercise and I would like some simple, quick and healthy lunch recipes. Thanks

Hi Rubi! I’m hoping to create some quick, pantry staple recipes in the coming weeks, but please bear with me while the grocery situation sorts itself out around here. 🙂

This so AMAZING! This is a dish that I would totally make for myself and probably keep for myself. My grandmother used to make something similar when I was a little girl.

So glad you enjoyed it. 🙂

Wow that looks delicious. I love spaghetti squash. I know what you mean about exploding spaghetti squashes — I cooked one in my microwave and it exploded, blew the door open, and just missed my baby in the high chair! I had poked the skin, but don’t think I stabbed it deep enough. I had to get a new microwave – it was totally destroyed. So I always cut them in half now…

Looks like you used French green beans. LOVE that idea! Will try it this Thanksgiving.

I am now curious of the green beans with tomatoes and onions? Help

I think it’s ok to call this recipe low carb, but healthy is a push….with bacon, cream cheese and pork rinds.

Those of us living a low carb lifestyle know the actual science show no health issues from saturated fat. Sugar is the enemy.

Can I use can green beans and do I cook them first?

Canned green beans should work fine. No need to cook them first.

Can this be made a day ahead?

Has anyone made this in advance,for the next day I am prepping dishes for tomorrow dinners

I haven’t, but should work fine. 🙂

I am making this two days ahead. Should I wait to add the pork rind until I’m ready to bake?

I experimented with this last week in prep for Thanksgiving. I liked it better than the regular! I sauteed fresh mushrooms separately (since they produce so much water I was afraid of messing up the cream cheese sauce) and added it to the mix and it was DELICIOUS! I can’t wait to introduce this to my family this week! Thanks so much!

Yay! Hope it’s a hit with the family too!

Can you make this ahead and put in fridge for cooking latter in the day?

Yes, that should be fine!

I dehydrated some mushrooms and made a powder out of them. Think I will add a bit of the powder to this.

If I was to use fresh green beans with a pre-cook them or just mix it all together raw?

I haven’t tried this with fresh green beans, so I can’t say.

I have not made this particular recipe but I have made a different one with fresh beans, definitely precook the beans.

I calculated the nutrition based on this serving 8 people. I didn’t measure the serving size by volume.

Do you thaw the frozen green beans first?

OOOOOOO, yeah. Green bean orama! I open a can of green bean and dump them in my salad, then eat the heck out of them while I’m fixing the rest of dinner. I LOVE green bean. Pick them off the vine and eat them still warm from the sun. Cooked, raw delish!

Thanks Karly, this one is a winner too.

I definitely have trouble getting in my greens throughout the day. This is the kind of recipe I need!