Million Dollar Spaghetti Casserole without all the carbs!! This spaghetti squash casserole is a riff on one of my favorite pasta recipes and it is totally family friendly, packed with cheesy goodness, loaded with flavor, and keto friendly! 8 net carbs serving.

One of the things I love most about this time of year is the whole comfort food situation.

People don’t seem to like casseroles in the dead of summer, but they are 100% totally acceptable the minute it starts to cool off. 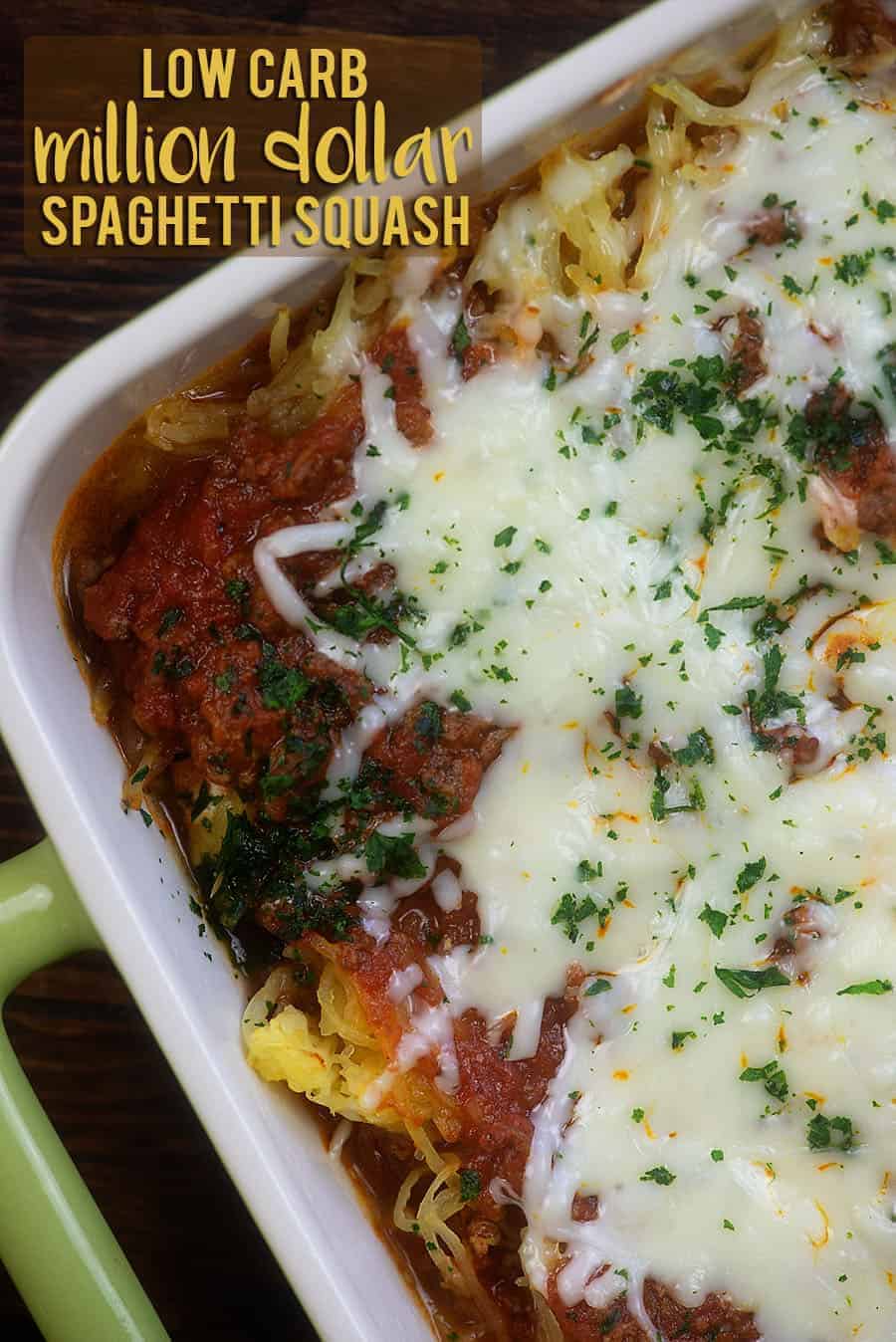 Sure, I miss the sunshine and my pool, but did you take a close look at this cheesy spaghetti squash casserole? Doesn’t it look dreamy?


One of my favorite pasta recipes is million dollar spaghetti so I took the idea and swapped out spaghetti squash for traditional pasta.

This is probably one of the best spaghetti squash recipes I’ve made yet! 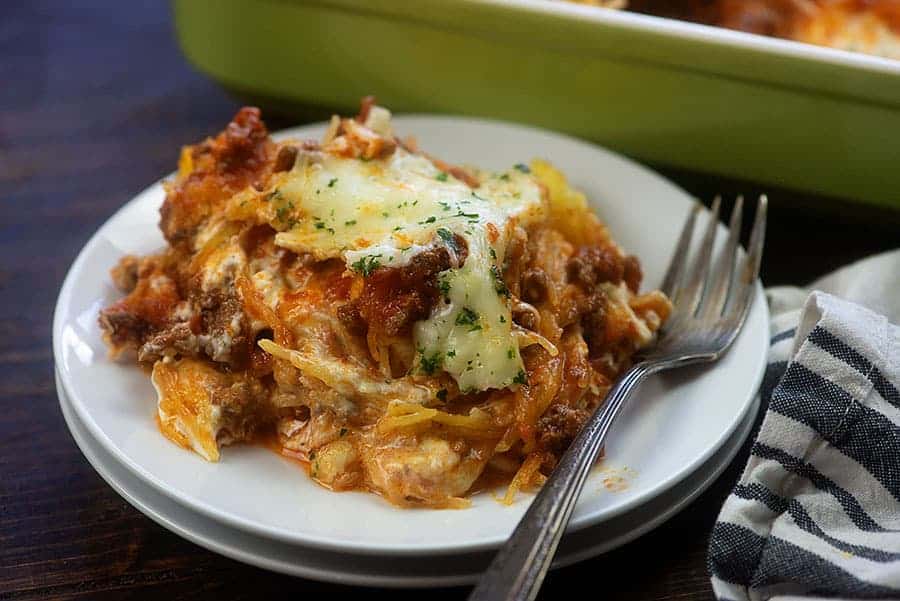 How to make million dollar spaghetti casserole without all the carbs:

To start, you’re going to cut a spaghetti squash in half. This probably sounds like an easy task, but if you’ve ever worked with spaghetti squash before you’ll know that you need to bring your muscles and a sharp knife to this game.

Spaghetti squash are HARD on the outside. Dig that knife in (carefully!) and cut all the way around. You can do it, I believe in you. 😉 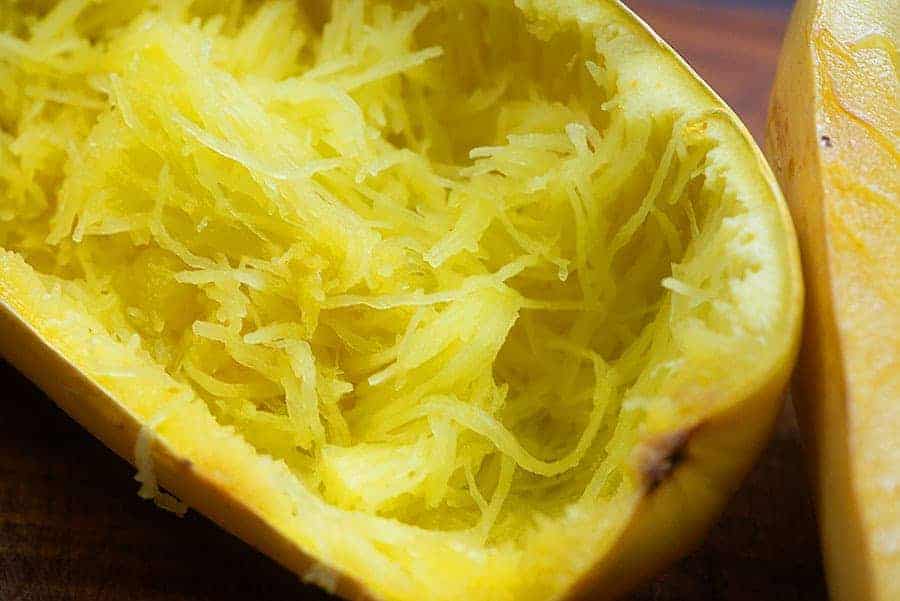 Now, scoop out the seeds, drizzle some olive oil on the inside of the squash and place it flesh side down on a rimmed baking sheet. Roast it for about an hour.

When the squash is cool enough to handle, use a fork to scrape long strands of squash out.

If you go lengthwise down the squash you’ll get short strands of spaghetti. If you go across the width of the squash, you’ll get long strands. It’s kind of counter-intuitive, but just play with it. It all tastes the same either way. 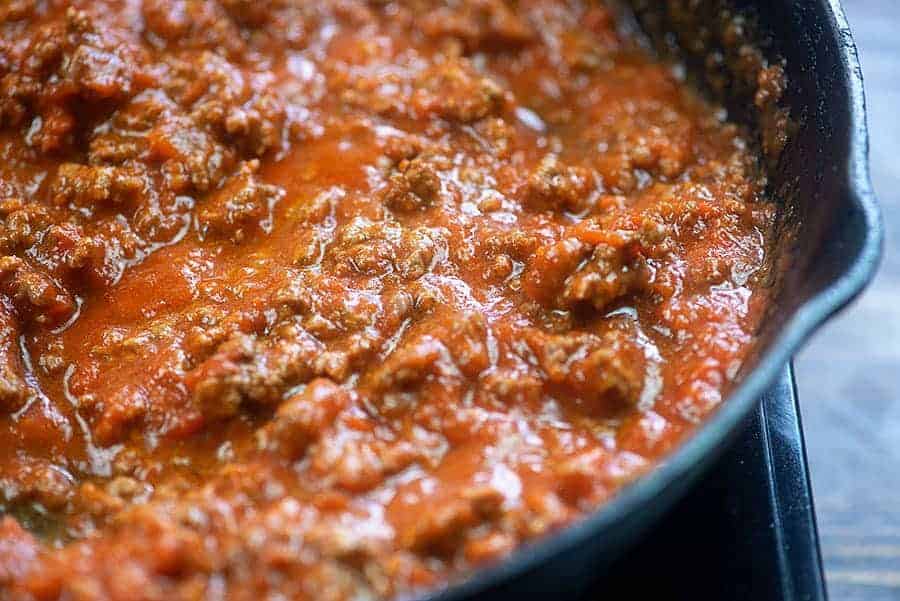 Brown up your ground beef and then dump in your favorite low carb marina.

I prefer Rao’s and use it almost exclusively. There are only 4g net carbs per 1/2 cup serving. You can find it at most any grocery store, usually up on the top shelf. It’s a little pricey, but it’s seriously the best!

Let your meat sauce simmer away while you get to work on the million dollar aspect of this recipe: dairy goodness! 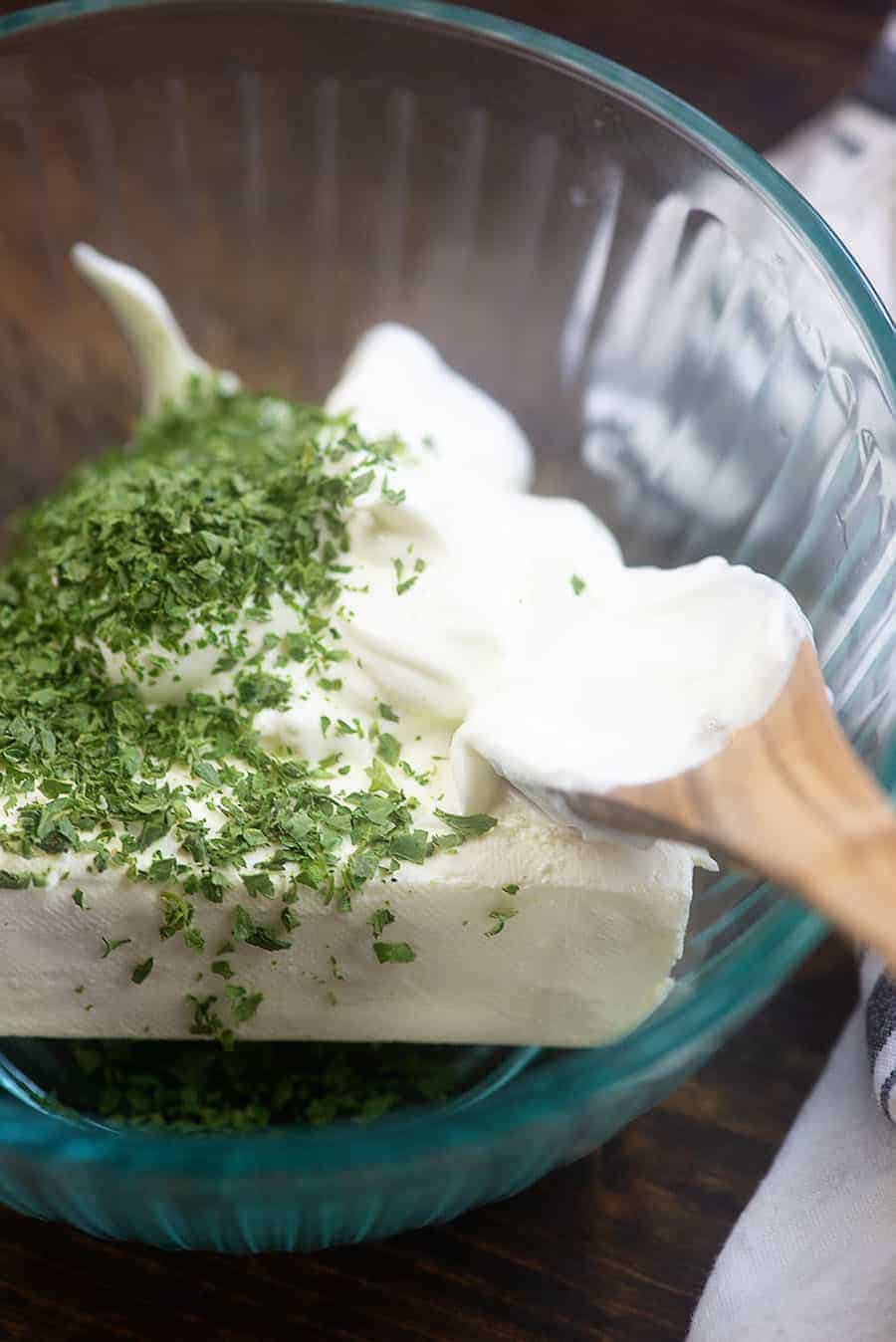 Add some cream cheese, sour cream, and fresh parsley to a small bowl and stir until well combined. This mixture is so creamy and amazing.

The traditional million dollar spaghetti calls for cottage cheese as well, but it adds a fair amount of carbs so I skipped it. If you have room in your carb allowance, go ahead and add a 1/2 cup of cottage cheese to this mixture. You won’t regret it! 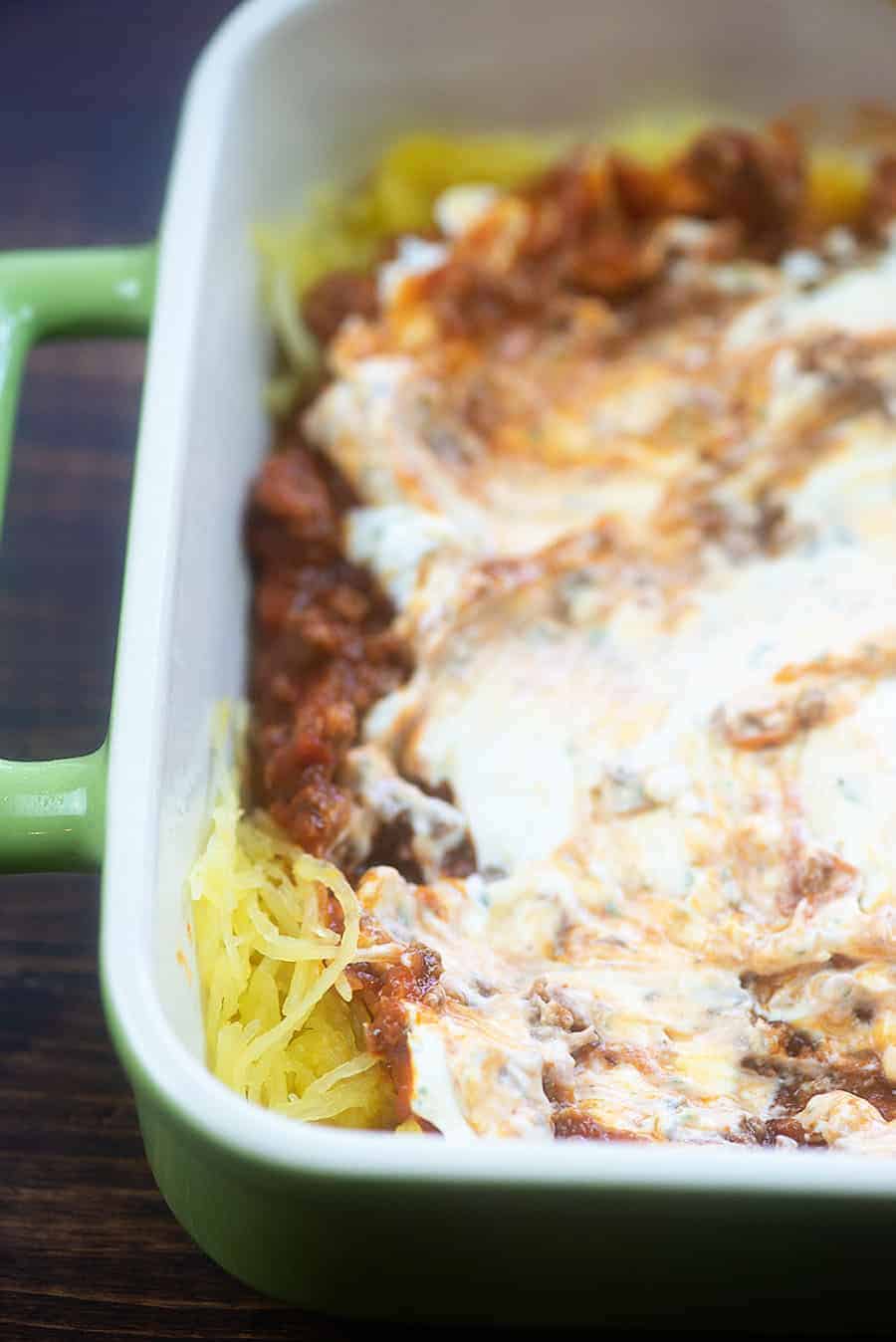 Add half of the spaghetti squash noodles to the bottom of a 9×13 baking dish.

Top that off with half of the meat sauce and then spread on all of the cream cheese mixture. 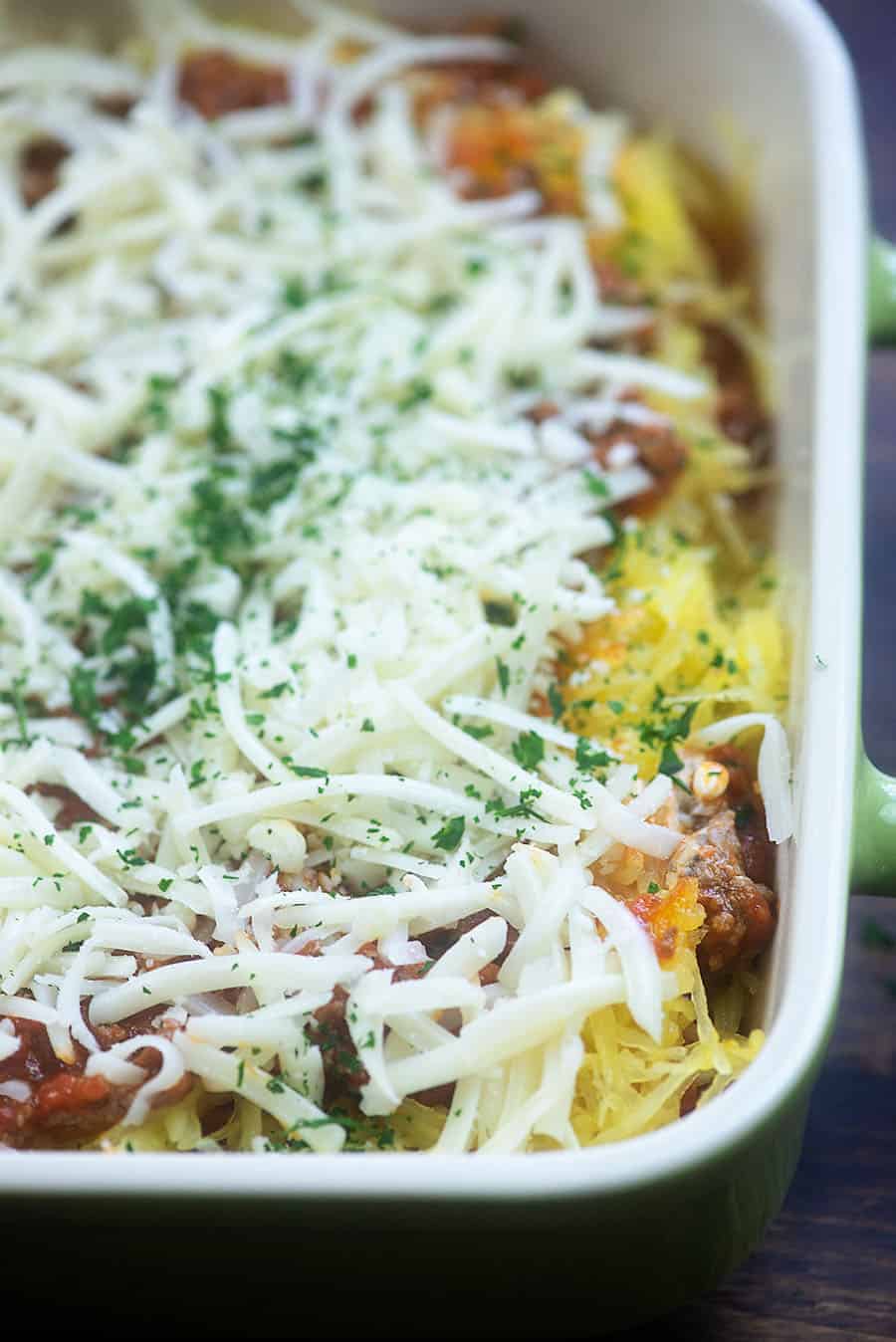 Next, add the final layers of spaghetti squash and meat sauce and top that all off with some grated mozzarella and a little parsley.

Pop this in a hot oven for 20 minutes to allow the cheese to get all warm and melty.

I like to serve this with a big side salad topped with my homemade ranch dressing. 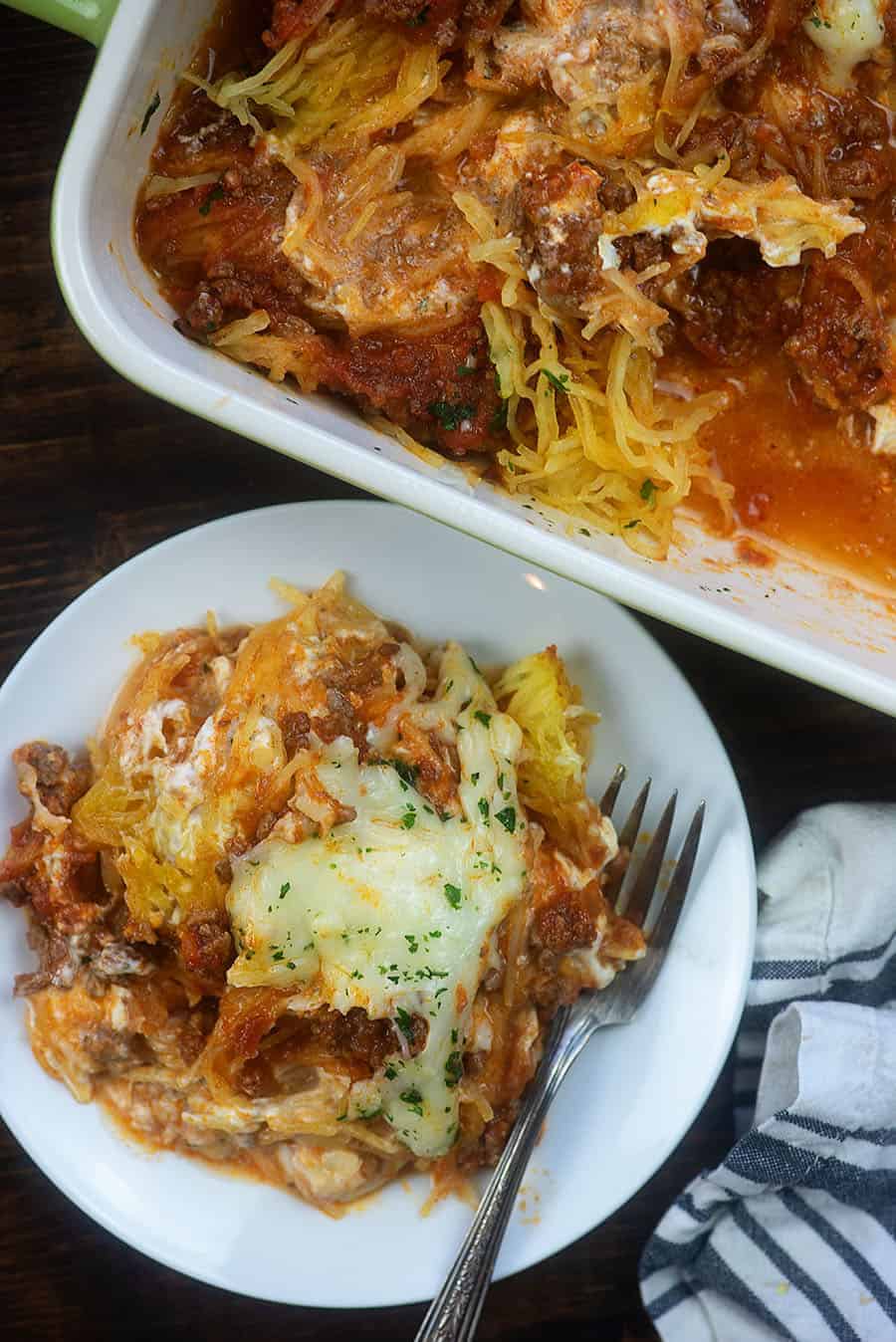 Zucchini Pizza Boats: Pepperoni on mine please, but you can add any of your favorite toppings!

Buffalo Chicken Meatballs: We eat these for dinner, but they’re fun for game day too!

Cabbage Rolls Recipe: None of the work, all of the flavor! 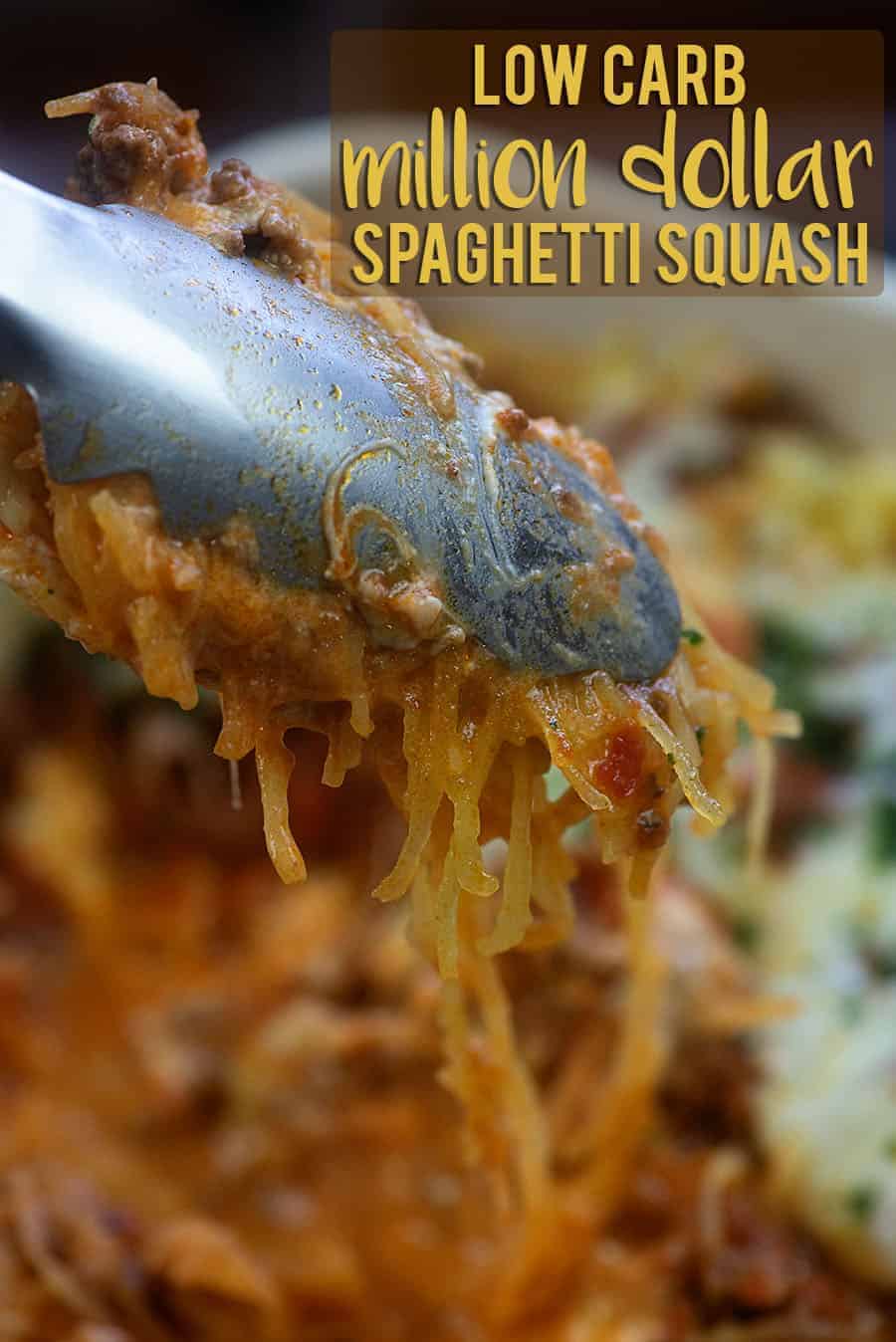 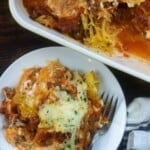 For the meat sauce:

For the cream cheese mixture:

I have made this recipe several times now! The whole family loves it. The only thing I seem to need to do different is I double the meat and marinara sauce. But even with regular spaghetti, I tend to use more sauce than noodles. Definitely a keeper!

Glad to hear that! 🙂

I made this tonight it was absolutely delicious. I thought of some other things to try in it like little pieces of Italian sausage or ricotta cheese.

There’s no seeds in a spaghetti squash

Sure there are! In the center there are quite a few seeds that will need taken out. 🙂

Fantastic recipe! I substituted a seafood medley of scallops, shrimp and calamari for the ground beef and it was amazing! I will definitely make this again!

Holy Sh%$!!!! This casserole is amazing! Just what I was looking for. I added spinach to the creamy cheesy topping. And added parm and a whipped egg to the squash layer. Oh, I added ‘shrooms too because I love them. Thanks for the recipe!!!!!

Can I use angel hair pasta instead of squash for this recipe. Thanks

Yes, that should work fine.

I made this a few weeks ago and used ground turkey sausage instead of ground beef. It added lots of flavor and was delicious!! I’m going to try making it with ricotta cheese next time. Has anyone tried making with ricotta? If so how did it turn out? Just looking for suggestions