BAKED SPINACH CASSEROLE loaded with cheese and bacon makes a decadent side dish that is easy enough for any night of the week, but special enough for holiday dinners. Only x net carbs per serving, too! 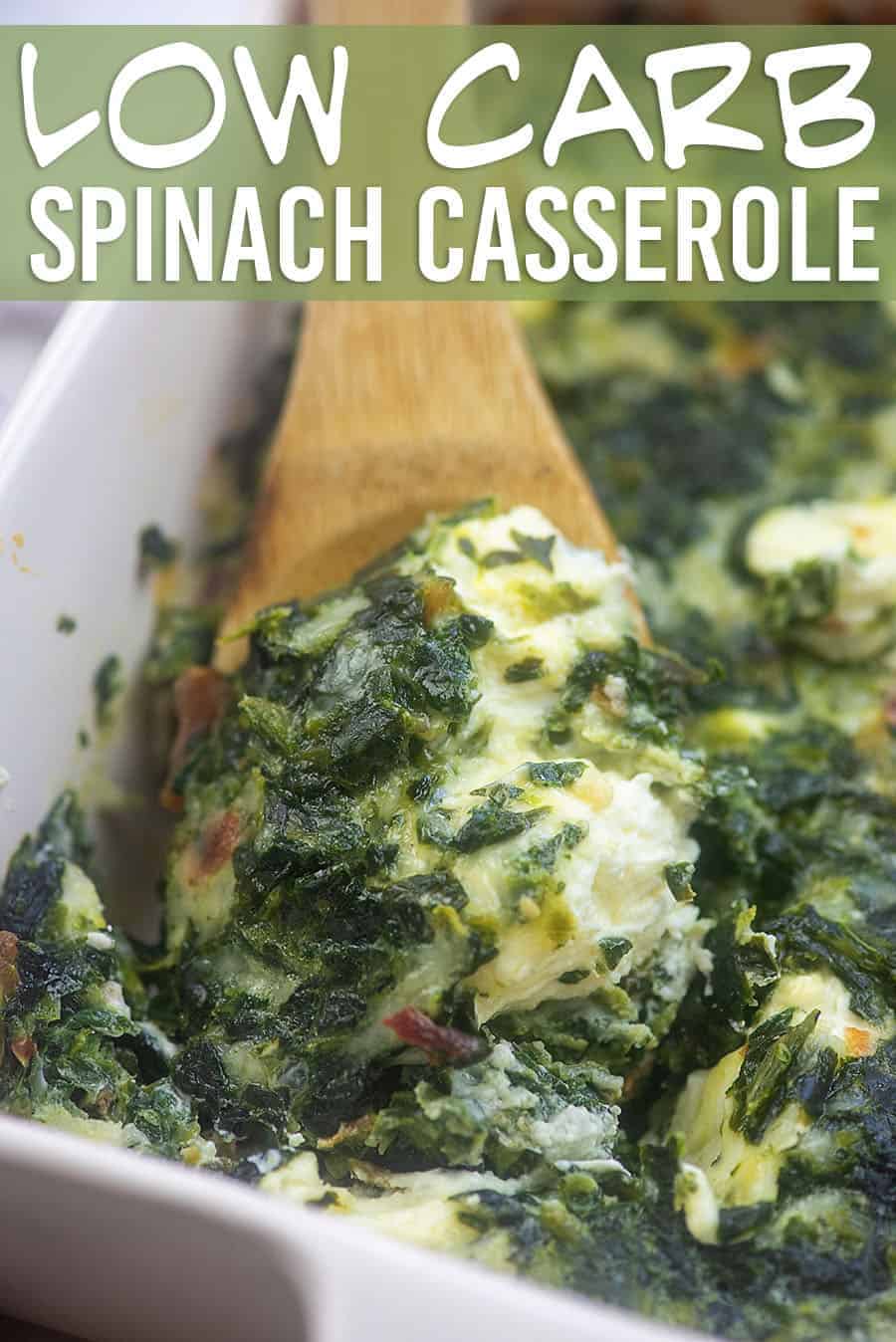 I have no problem sneaking spinach into salads in my house. The kids will eat it just fine without complaint.

I also sneak spinach into their smoothies most of the time.

But cooked spinach? They’re usually not a fan.

Either way, this baked spinach is a decadent cheesy dish that is easy enough to make any night, but fancy enough for company or even a holiday dinner. Love dishes like that! 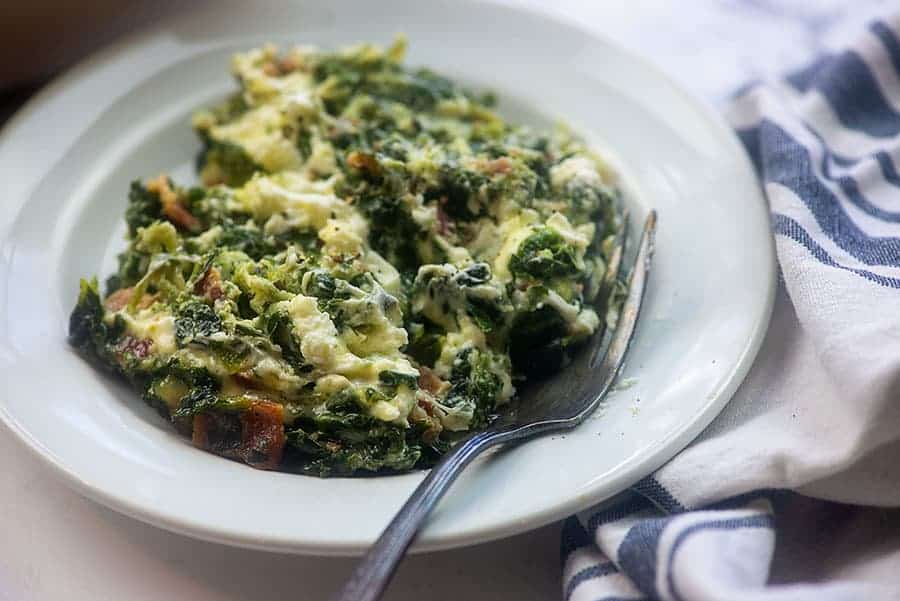 How to make cheesy baked spinach:

This recipe is super simple and starts off with a couple packs of frozen spinach. You’ll want to be sure to thaw it and drain as much liquid as you can from the spinach.

To drain the spinach well, I place it in a colander and press it down to squeeze out as much liquid as I can.

Add your spinach to a mixing bowl along with some cream cheese, monterey jack, fried bacon, whisked eggs, butter, garlic, and salt and pepper. 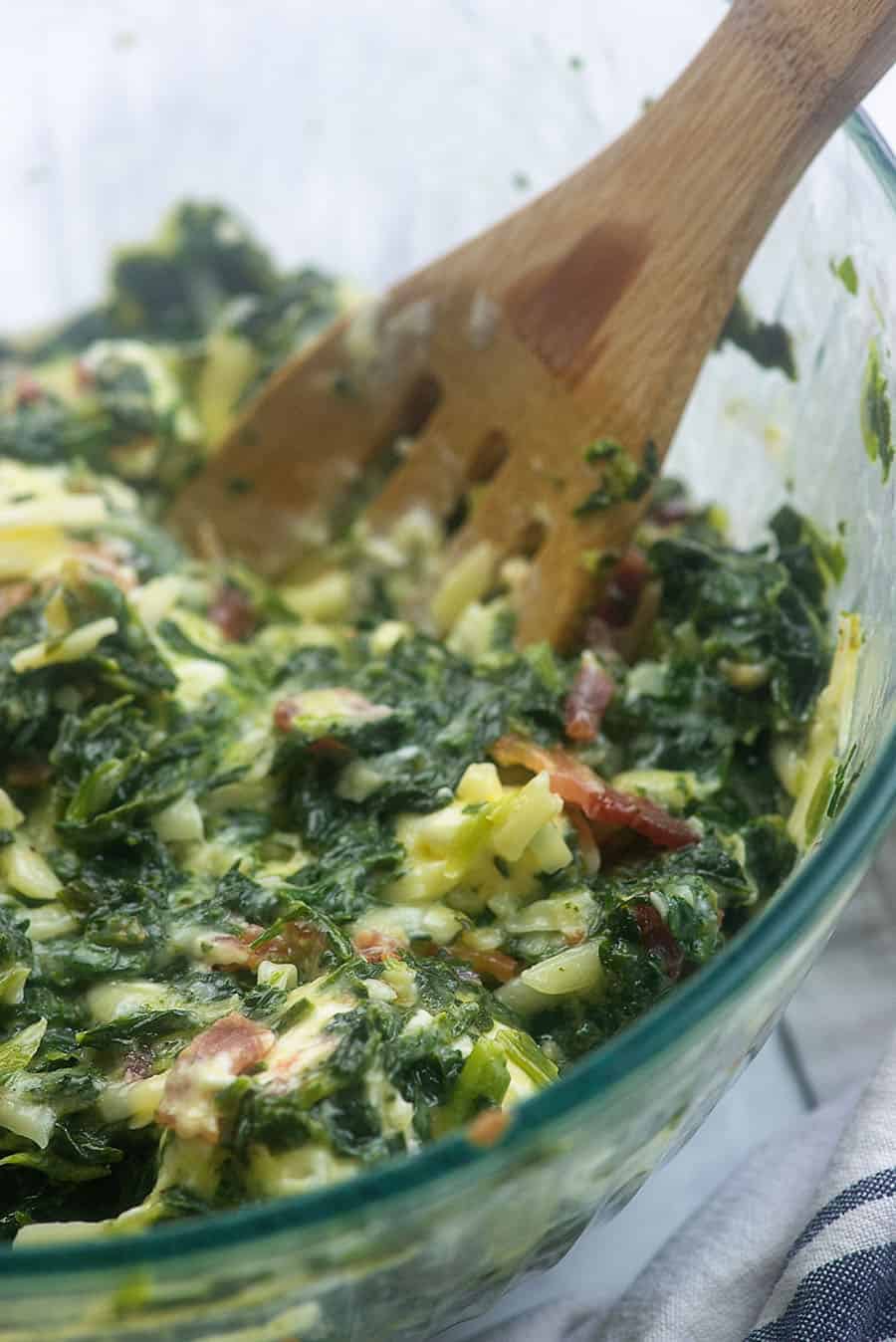 Stit the mixture all up. It doesn’t look like much here, but man this bakes up into something tasty.

Spread your spinach mixture into a 9×9 baking dish and pop it all in the oven.

This spinach casserole bakes up in about 35 minutes. 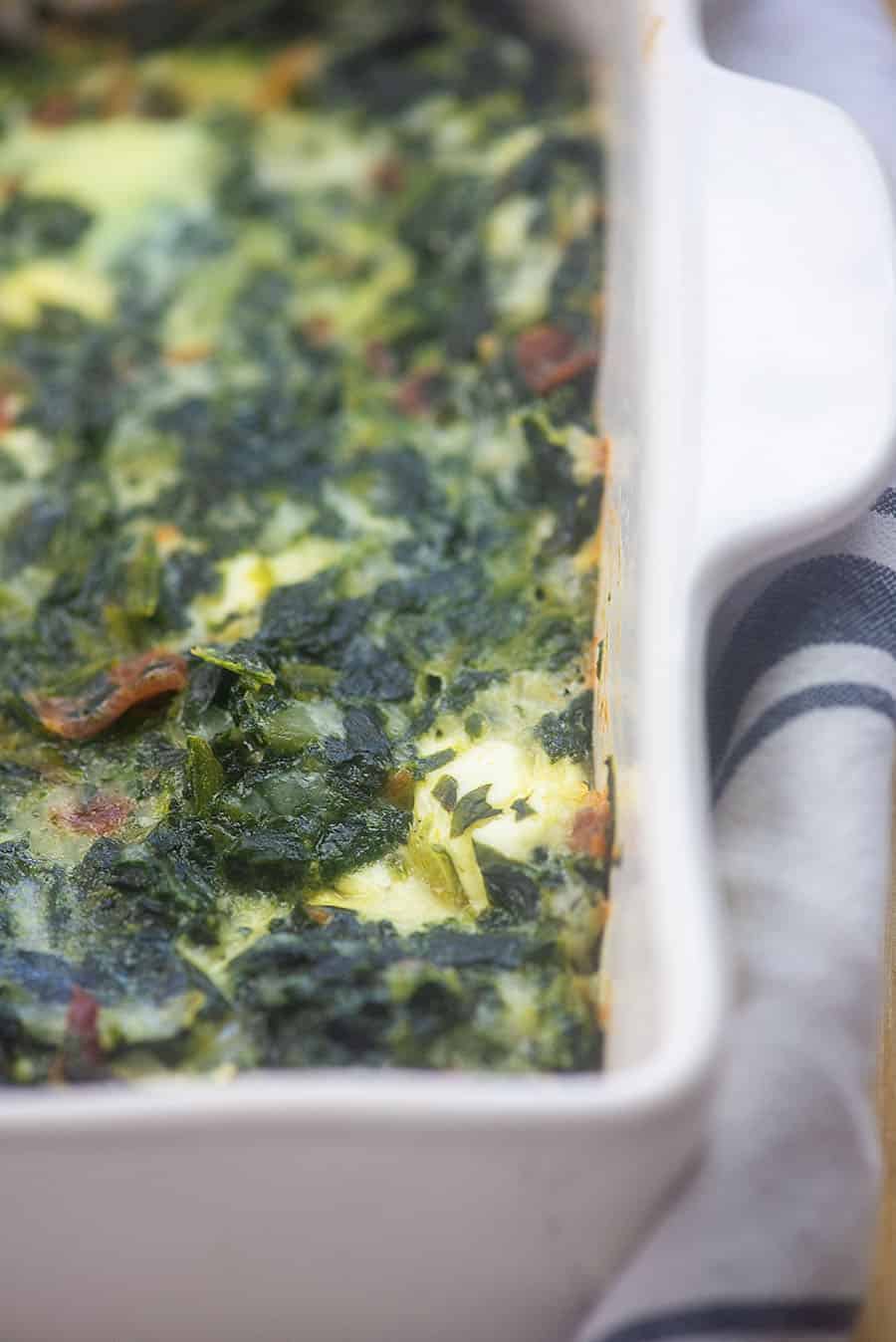 Is this dish spinach souffle?

I actually discovered this recipe in an old Taste of Home magazine and tweaked it just a tiny bit. It was called spinach souffle, but it’s not at all like a traditional souffle that puffs and rises, so I’ve renamed it.

I wanted to go ahead and mention spinach souffle here though, because that was it’s original name and readers may recognize it if they stalk Taste of Home magazines the way I do. 😉 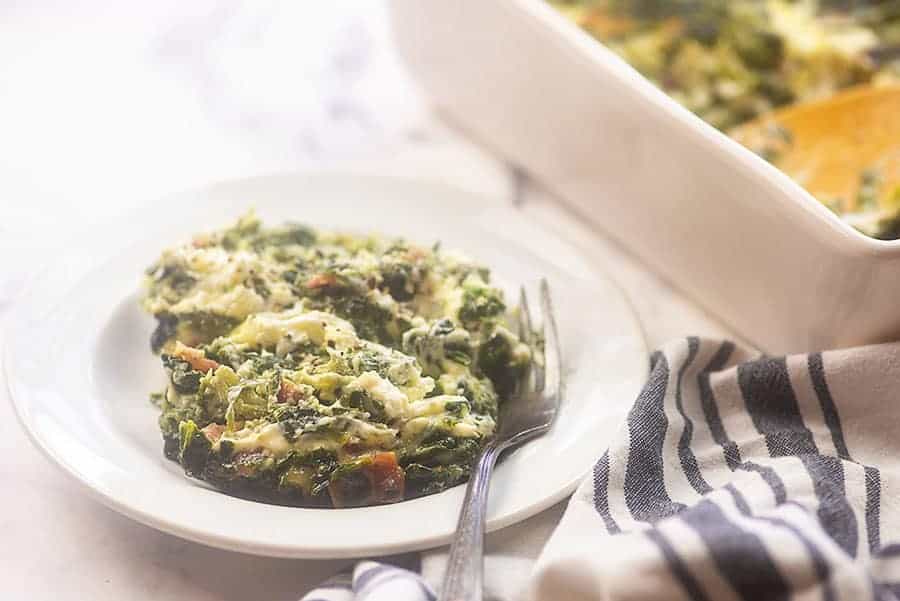 I try to eat spinach often, because it is a great source of magnesium and potassium, both of which I have to watch while on a keto diet.

Keeping your electrolytes in balance while eating low carb or keto can be tricky, because the diet often acts as a diuretic (meaning you’re peeing out those electrolytes).

I notice when mine are out of balance when I get heart palpatations, charley horses, fatigue, and brain fog. Please keep in mind that I am not a doctor or health care professional and if you’re having these issues it is important to visit your doctor. This is just what this signals to me after years of listening to my body. 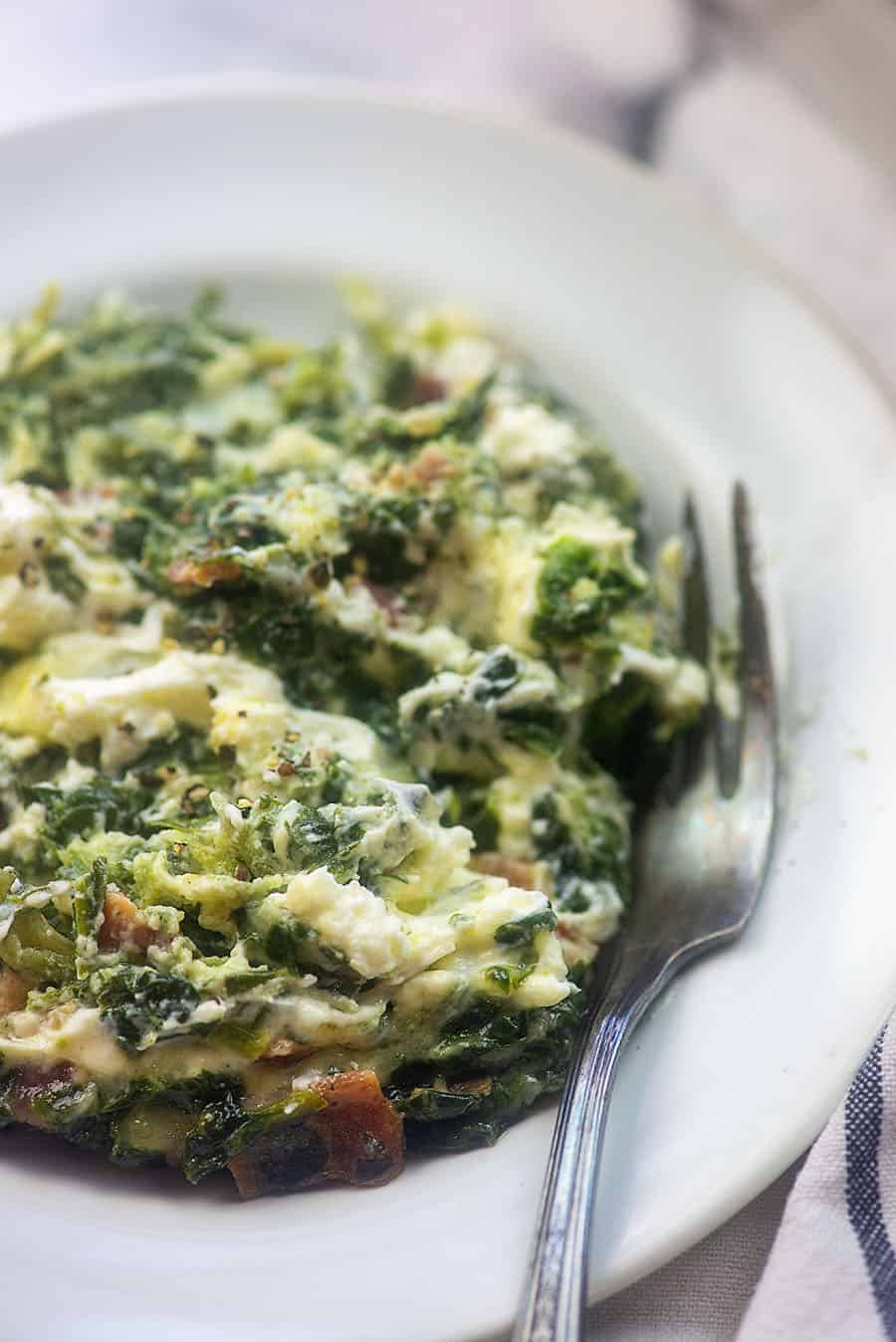 Spinach Stuffed Pork Chops: This is an easy way to dress up pork chops!

Stuffed Chicken Breast: The most popular recipe on my site!

Tuscan Chicken: The sauce is worth dreaming about. 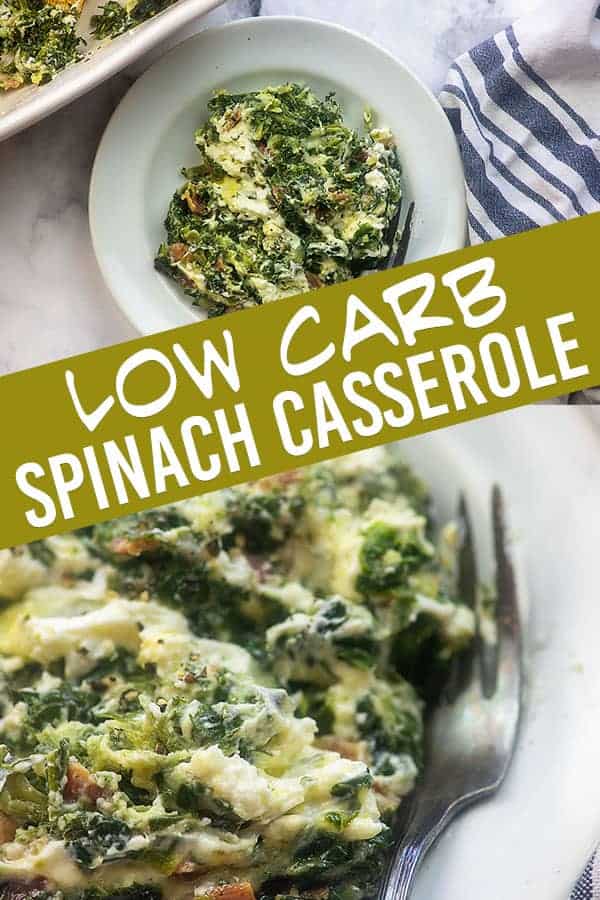 The original recipe from Taste Of Home called for a full 8 ounces of cream cheese, but we find this to be extremely rich and more like a spinach dip.

Use pepperjack cheese to give it a bit of a kick, if you prefer.

How much spinach, if made with fresh spinach

I’ve only ever made this with frozen spinach, so I really can’t say.

Hi Janet. A 10 oz package of frozen spinach is the equivalent about a 1 pound bunch of fresh spinach. Hope this helps you. I plan to make this with fresh spinach, too.

Made this tonight…loved it!!
Minor changes…
– 2 bags Wegmans frozen organic spinach which is in 12 oz bags
– I used 8 strips of bacon (just because)
– shredded Mexican blend cheese instead of the Monterey Jack (no spices or seasonings in it. It’s just a blend of Cheddar, Monterey Jack, Asadero & Quesadilla Cheeses. A wonderful melty blend of cheeses)

Pretty sure none of these additions would make it better than the original recipe, it’s just what I had on hand.
Oh…I used unsalted butter and didn’t add the additional salt. Just thought there would be enough salt with the cheeses and the bacon. It was excellent.

Sounds like delicious swaps! Glad you gave it a try! 🙂

Yummee !!!! I made this w/out the bacon and was delicious! Thanks so much for your great recipes : )

Can I freeze the leftovers?

I’m not sure how this one would freeze…sometimes cream cheese gets a little funky in the freezer.

I so wish I could eat dairy. ☹ Makes this diet super hard with delicious looking recipes like this one!

Could you follow this recipe but use cauliflower or broccoli? I have a bunch of frozen bags to use up. I would steam the veggies first.

You could definitely try it! I have a broccoli cheese casserole though, if you don’t want to experiment. 🙂

Thanks Karly for the response. I’m new to your site and so happy I accidentally discovered you.

Can I make this a day ahead and refrigerate before baking?

Yes, I think that would be fine.